James Stephens III grew up in Dillon but left the area to attend college, and make a name for himself in the entertainment field. Stephens, a well-known comedian and impersonator who works in Las Vegas, other entertainment venues, and on cruise ships around the country, and Hayes, an actress and playwright, have been friends for more than 25 years.

Twenty-five years ago, Stephens decided he wanted to give back and help kids from his hometown region, and beyond, and began hosting his annual scholarship gala. I’ll be on the red carpet tonight to interview the dozens of deserving kids who will be receiving scholarships and laptops this year. Since 1990, more than 90 kids in North and South Carolina have received scholarships.

Steadman Graham, the Chicago-based entrepreneur, educator and life partner of Oprah Winfrey, is the recipient of this year’s lifetime achievement award.

Tommy Ford will host the 2013 gala, which will feature performances by an array of musical and comedic talent, including R& B star Robert “Peabo” Bryson, the Greenville, S.C. native best known for his Grammy-winning duets for the animated Disney features “Beauty and the Beast” (with Celine Dion) and “Aladdin” (with Regina Belle), will headline the show. 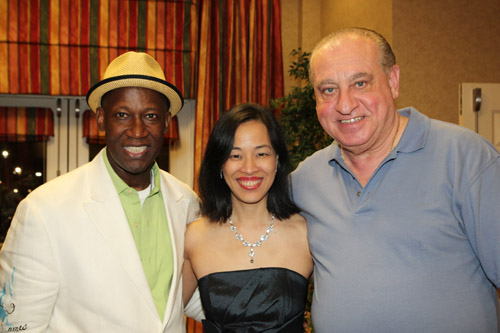 Tickets for the gala begin at $50 and can be purchased through the foundation’s website.

Scholarships through the James Stephens III Foundation are available to high school students in the Pee Dee who wish to continue their education and are in good standing at their school. For more details and an application, check out the foundation website at www.thejamesstephensfoundation.org.